Go To Myrtle Beach For Your Next Light Show? Image via WikipediaYes, we said it. Myrtle Beach is now on the map for its light shows. A new 200ft tall LED lit ferris wheel is the tallest ferris wheel on the East Coast and boasts a computer generated light show at night. This $12 Million project is the latest landmark for the city and a hopeful to help boost the tourism economy over the summer.

For more information on this article, visit:
http://today.msnbc.msn.com/id/43112192/ns/travel-destination_travel/

What is Lima Peru known for besides some ancient ruins? How about DJ Lights? 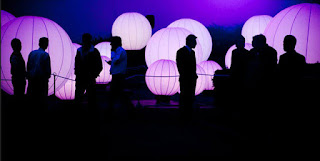 An interactive art exhibit, created by Cinimod Studio called DJ Lights, is a new age art installation combining unique LED Lights with body movement. This spectacular show allows the DJ to control a whole sea of lights in the crowd. 85 inflatable LED globes change and dance between colors as the DJ's body movement is captured and displayed in colored form.

The exhibition contains an egg-shaped structures where the DJ can control the crowd. A high-accuracy thermal control tracking camera senses the DJ's movements and as they point, gesture, dance and play, the software translates body movement into light and sound action. So who wants to go to Peru?

Fergie Lights Up the Billboards with EL Wire

As singers and performers are looking for the next greatest invention to help boost their image, Fergie and the Black Eyed Peas embrace technology as if it were putting them on the moon. Having LED and EL Wire costumes, they certainly know how to put on a show. Check out last night's Peas performance with custom made light up costume kit.

How to Make an LED Light Glow without Electricity

Image via WikipediaWho says LED Lights take a bunch of electricity? Well, no one really. In fact, people are finding new ways to light LED bulbs everyday. Check out this quick how to article on how paper flowers and salt water can make your own LED flower! Image via WikipediaCertain LED lights before the end of the year will be able to be powered through Android devices, like cell phones and tablets. Basically how it works is there is a radio frequency similar (but different) to wifi, bluetooth, and other wireless signals, that talks to different devices. Once enabled, you will be able to fully control your light while sitting on the couch.

What a wonderful world we live in... For more information on this technology, check out:

The new Arbonata Light Table incorporates technology with a modern flare. What happens when you combine 1,700 LED Lights into a table, artistically displayed as a tree? You get a uber modern new dining table fit for, well, Tron. Price for this table is still yet undisclosed. For more information on the LED Light Table, check out Arbonata.com. A recent play that is sweeping the nation is called "Darwin The Dinosaur", which is a kids based play that tells the real life (not really) account of two dinosaurs. What gets the kids to really pay attention is the dinosaurs are all dressed in EL Wire clothing. These light up outfits are the stars of the show and get the kids jazzed up about learning.

Hopefully more plays like this will incorporate fun costumes and light up clothing as this is becoming a new trend among young adults. For more information on Darwin The Dinosaur, visit the link below.


Brought to you by Ellumiglow.com