The Man Burns in 39 days! Glowing nirvana is about to commence and everyone prepares the same way... Well everyone except us. If you still need EL Wire before the big day, let us know and tell us what it's for. We have plenty of every color and are preparing to do so throughout the Burning Man Festival season. Well, that's the plan anyway. Each year we try to double our Burning Man preparations, in hopes to fulfill more Burner's delights. So let us know what you need, place your orders online and let the glowing begin!
- July 27, 2010 No comments:

The Chinese have given us so much, and now they are at it again. Using my iPhone as a translator, I am able to know exactly what they are saying! Well, not really, but it's pretty funny even if you're like me and don't know any Chinese at all.

Make your own light sabers with EL Wire, or check out the Laser Lights.
- July 21, 2010 No comments: 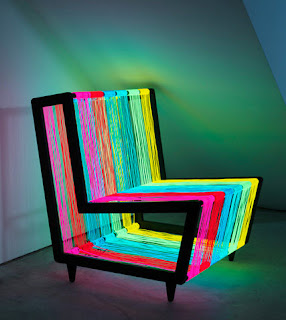 The masters at Kiwi&Pom have made the impossible... well possible. And not only possible, but took a giant leap forward in EL Wire Innovation & Design.

The "Disco Chair" is made from over 600 feet of electroluminescent wire... And yes, that is 600 feet. The chair when activated, glows a gorgeous rainbow, and even has a "disco" setting that allows the chair to flicker like it's dancin'! 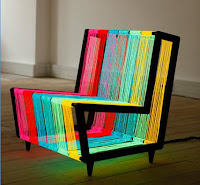 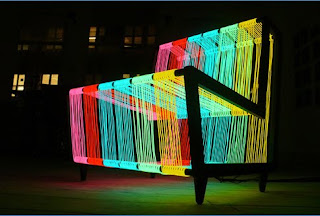 Why Are Set Pieces Terrible This World Cup?

I know this is not the typical entry you would expect, but I have been asked enough this soccer season why free kicks and corner kicks seem to be so poor this World Cup? All the announcers seem to have a certain stigma about set pieces where these are the most dangerous plays in the game. And typically they are correct.... Not this Tournament. But why?

Nearly every player in the World Cup plays for a club team, where they practice day in and day out throughout the year. Many players end their training sessions with set piece training, whether it be taking them, or defending. When you have certain club secrets that you have found work well with your club, an easy way to broadcast those secrets to the World is the largest stage on the Planet. The World Cup. Why give up your most precious secrets to everyone to use? A secret is not so secret when everyone know about them so some of the best secrets are not used throughout the Tournament.

Also, many clubs have a different mentality about set pieces. On defense, some clubs tend to have a man to man marking mentality, where everyone that is inside the box must have another body on them. The other side of the coin is zone; where every defender in the box has a zone and sticks to it. Some keep all 11 in the box on set pieces, others choose to have only their select few to go up for the 50-50 balls. On offense, some teams are all about misdirection or trickery. Other teams rely solely on brute force. We can't say either is better because we have seen both options successful, but one thing is for certain this World Cup. Set pieces look horrendous.

World Cup coaches like Bob Bradley need to think heavily about practicing those pieces and coming up with their own renditions, solely for the World Cup. Having opportunities close to the box are few and far between, and most teams will have only a handful, if any, each game. Those wasted opportunities are a perfect example what not to do on the World's Stage. My prediction for next World Cup is the team that has the most set piece conversions, will take it home.