Just because this is too cool to pass up, our Japanese friends, Wrecking Crew Orchestra have one of the most explosive dances of 2012, made with Light Up Costumes.

A BIG, "Well done"  to our Japanese friends for submitting this video. Great dancing and spectacular sequencing make this a sure-to-be million view video on YouTube. 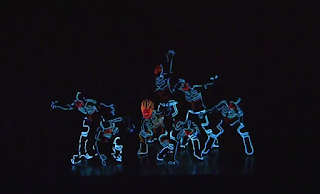 If you are wondering how this is done, read below:

Each costume in the video is 2.6mm EL Wire and driven by two battery packs, one for the torso, and the other for the legs. The sequencing effects are all custom made sequences that all work from a DMX-512 output. The scenes are preset and can be "fired" on cue from a 3rd party behind the scenes. These scenes can be programmed individually, or together as you see in the video.

Here is a great video for how Electroluminescent technology works. From our friends at limelite.com, this video shows the basics of the technology, where it came from, and gives us an indication about where it's going.

Exactly How Safe Are Lasers???

We have heard of a number of laser safety cases in the media recently, so exactly how safe (or dangerous) are lasers?

Just recently, we heard of a parent that pointed a laser pointer in a hockey game the opposing team's goalie, then got not only ejected, but sent to jail. About once a month, we see someone arrested for pointing a laser at planes in the sky (which by the way is a Federal offense). So why all the fuss about lasers?

According to data supplied by the FDA, the US Consumer Protection Agency, and Rockwell Laser Industries, there are no known cases of accidental injuries caused by Class 3A or Class 3B Laser Beams emanating from PROPERLY built and CERTIFIED laser projectors in an entertainment setting. That's not to say there has never been a case of injury due to lasers, however you may have noticed two key words above. Properly and Certified. Certified lasers are actually certified by the FDA, who patrols all lasers entering and leaving the United States. These lasers that are certified have been rigorously tested and deemed by the FDA to be PROPERLY built according to FDA standards. We are very proud to say ALL lasers sold by Ellumiglow.com have been given approval and fully certified by the FDA.

Now let's have some fun with statistics. Taken from the Consumer Product Safety Commission's 2009 report, the following estimated injuries (which were serious enough to require a visit to the local emergency room) from other products pose a much bigger threat than lasers:

In the same time period, who wants to guess the amount of laser injuries? If you guessed 3, you would be correct. That's right... only 3. One had a laser poked into his eye and left the emergency room without treatment. The second suffered bite marks on his leg after using a laser pointer on a stray cat, and the last was doing a magic trick and shoved the laser pointer too far up his nose... No joke.

So let's just say when properly used, lasers are extremely safe... Unless of course you plan on sticking them up your nose.

Matt Katzenstein, a Colorado State engineering student makes his own sound activated inverter capable of being used with his smart phone. This Android-powered system lights up to music, speech and other sounds. Check out the video below for a quick demonstration.

Another option is purchasing a Sound Activated EL Wire Battery Pack which can do the same thing, without all the technical know-how. Nice job Matt!
- March 06, 2012 No comments: